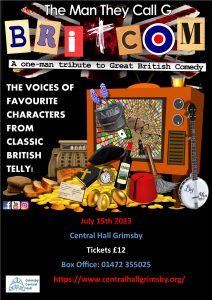 Britcom is a live one-man impressions show in which award -winning impressionist The Man They Call G takes us on a trip down memory lane with an A to Z of uncanny impressions of favourite characters from classic British TV comedy through the years. The show features sitcom scenes with multiple parts all being played by a single performer, including Last of the Summer Wine, ‘allo ‘allo, Red Dwarf and Fawlty Towers (and MANY more!).

These are interspersed with impersonations paying homage to some of the greats of stand-up comedy: Billy Connolly, Peter Kay, Tommy Cooper and Ken Dodd, to name but a few. There are glimpses of recognisable figures from the Carry On franchise and Monty Python; as well as musical interludes with The Man They Call G singing some of the classic theme tunes LIVE! The sheer range of voices has to be seen to be believed, and the show leaves you with a fuzzy glow of nostalgia. If you love good old British comedy, don’t miss this!