The Fisherman and Seaman Memorial Chapel

We are proud and privileged to be the custodians of this historic chapel and its many artefacts charting the appalling price paid by those who sail our seas.

The chapel is more than a monument to great sacrifices; it is somewhere to pause and reflect in a frenetic world and continues as a place of worship. 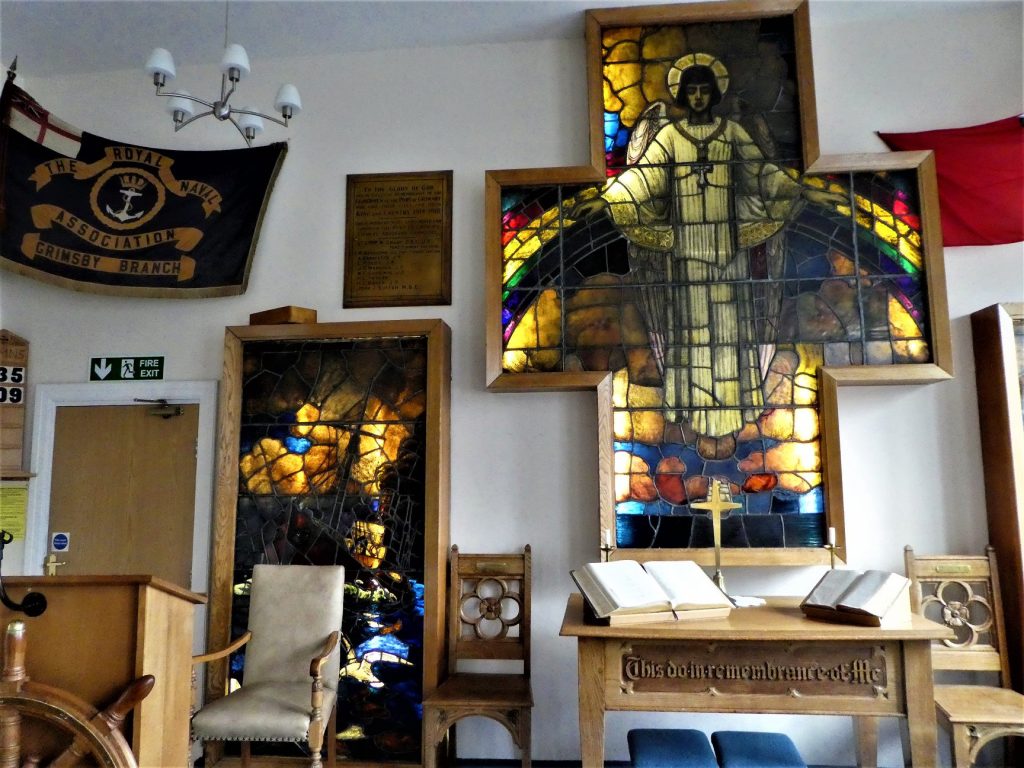 The Fisherman and Seaman Memorial Chapel was dedicated on the 22nd May 1966 “To the glory of God and in solemn remembrance of those who died at sea in the course of their duties while connected with this port”.

A long history of sacrifice and service preceded its foundation and the purpose of this information is to recall those days and further to guide the visitor around this living shrine of peace and memories.

The Sailors Family Society (formerly the Sailors Children’s Society and before that the Port of Hull Society’s Orphan Homes, Newland) began its work through a Mission to Fishermen in Grimsby in 1842.

In 1863, mention is made in the Society’s records of a “Bethel Chapel”.

In 1870 Mr. Jessee James took up his appointment as the first of a long line of Port Missioners.

Two buildings were erected for their work and the conduct of worship in 1882 and 1889.

Then followed the erection of the Bethel Mission in Tiverton Street, Cleethorpes in 1903. 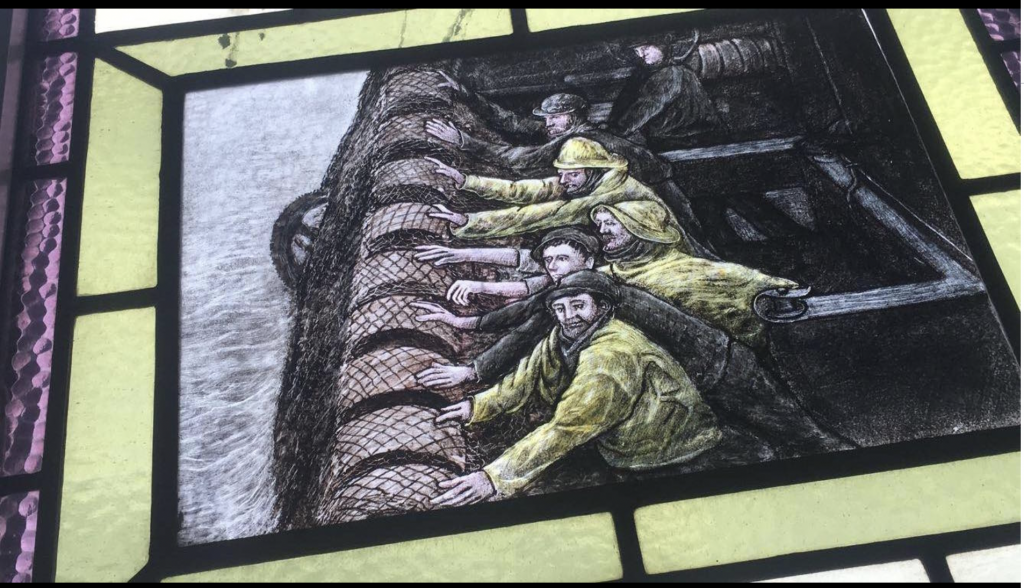 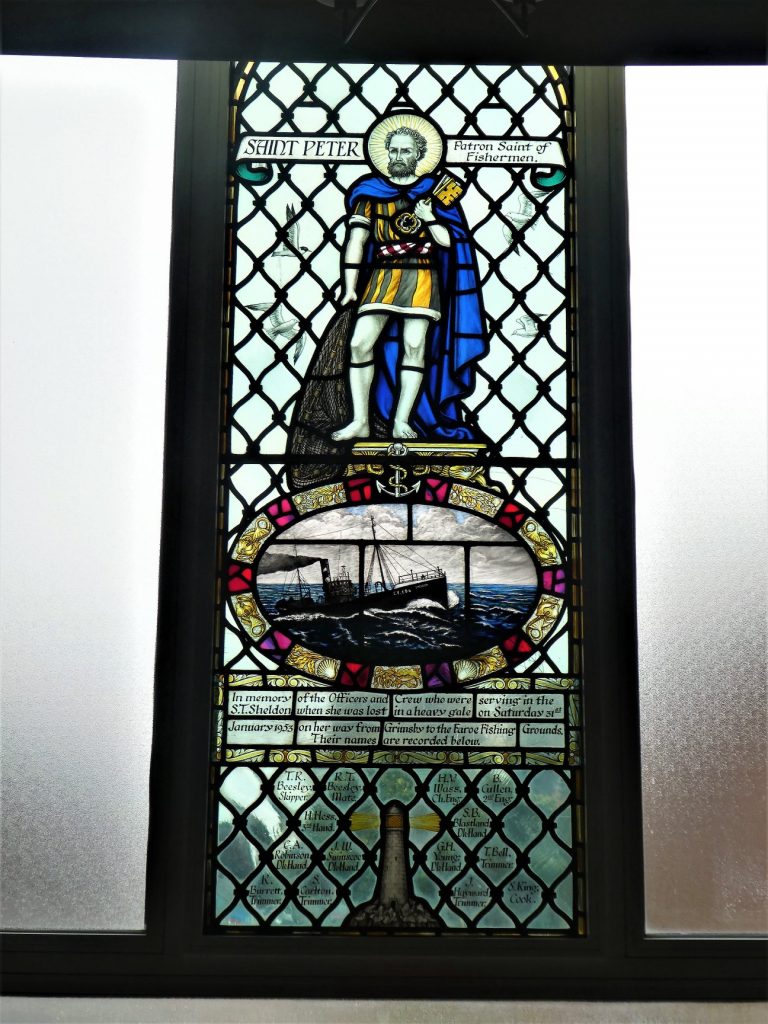 Represented here is the history of Grimsby; and the story of the appalling cost many of our men pay to follow their chosen trade.

This is sited now above the door of the Chapel was originally placed in the entrance of the Bethel Mission, Cleethorpes and bears the names of the Trustees of that time.

To local people all of them are names of past leaders to the fishing industry, some of the children and grandchildren remain leaders still.

Made of marble in the centre of the left wall of this Chapel has above it a descriptive plaque outlining its history.

The centre panel depicts a widowed mother and child (with a small trawler in the background) dressed in the clothes of the period, and this can still be remembered as the mode of dress for fishermen’s wives by many of the elder people in the town today.

Great care has been taken by the artist to give attention to detail, even to the laces in the boots of the woman and the lace petticoat of the child. The memorial was erected at an original cost of £600. 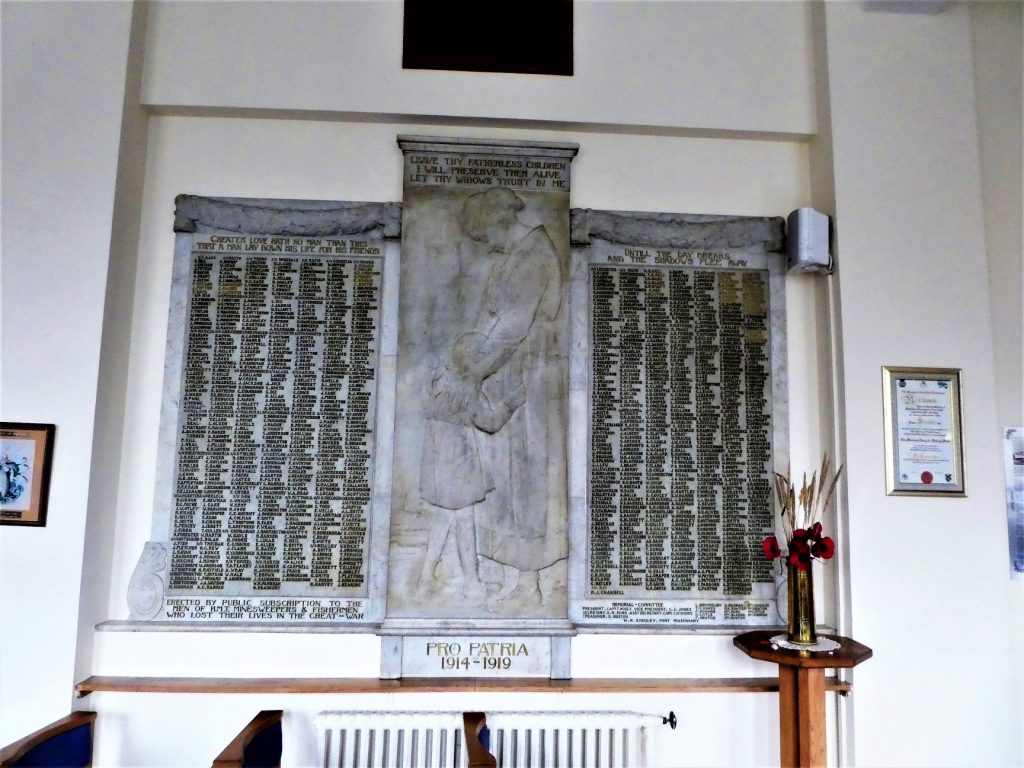 These are affixed either side of the war memorial on the left wall, record the names of each man lost at sea since 1920 and who have no known grave.

The intention was to continue where the war memorial finished, and the information has been faithfully recorded whenever it has been available.

The first of the boards was unveiled on December 28th 1930 by Mr. T.W. Bascombe J.P. during the ministry of the then Port Missioner W.H. Smedley. 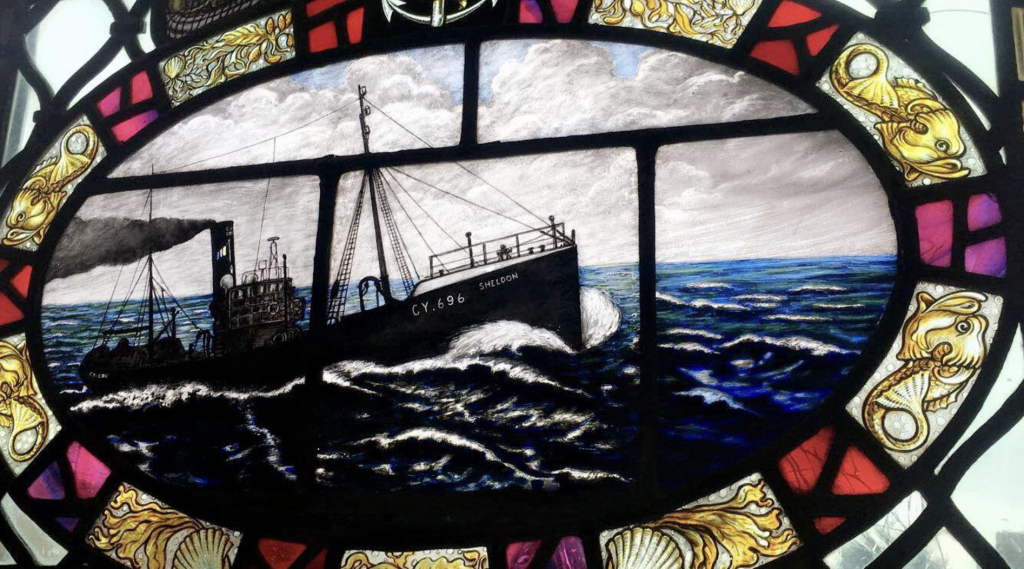 These form a backcloth in the present Chapel to the Communion Area.

Their history has been chequered and interesting. A Church was established in Immingham to serve the men of the Merchant Navy in the first World War, and through the generosity of the Fishing Vessel Owners of Grimsby these three stained glass windows were placed in that Church to the memory of those who were lost at sea through enemy action.

At the close of hostilities, the Church was demolished and the windows offered to the Parish Church Immingham. The offer was declined because they had not the size of window that would take the glass in its present form.

For a time they disappeared from the scene and were not found until a Miss Icemonga who was Commandant in the W.R.N.S. took a holiday in France.

At Dunkirk in the Mission to Seamen she recognised the windows and urged that as they had been intended as a memorial to Grimsby fishermen and seamen they should be returned to their rightful place in the vicinity of this port. 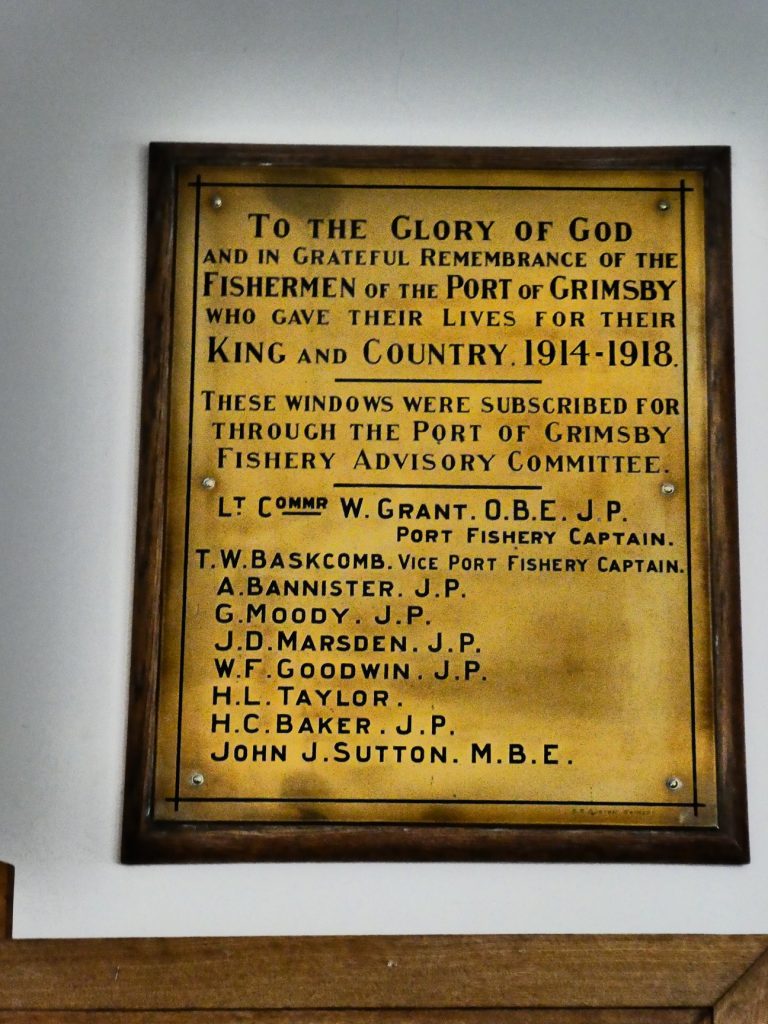 The Port Fishery Committee offered them to Capt. Smedley the Port Missioner and so they were brought back to the town at the expense of the original donors.

The unveiling was performed by Lt. Commander Grant on the 22nd December 1922. At the Bethel Mission, they formed three panels of a single window.

When they were brought to this Chapel, there was not the window space to use them as before and so they were arranged in their present position with lighting behind them. It is certain that the lighting has shown them to advantage and picked out the details that were not easily seen before.

The panel on the left depicts a trawler, the one on the right a merchant vessel and the great cross window in the centre, the spirit of God in the form of a guardian angel watching over the fishing fleet.

A plate beneath the centre window records the unveiling and lists the names of those who were responsible for this generous gift to the town. 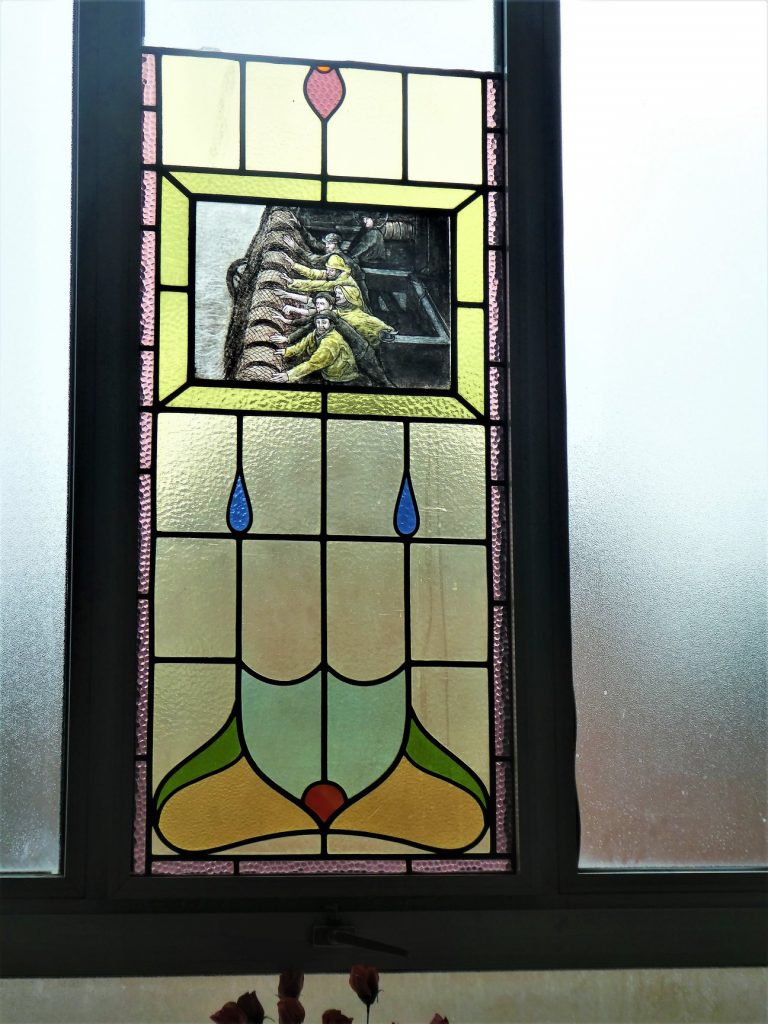 The tables and chairs were donated by Mr and Mrs. G. Jeffs. Mr. Jeffs for many years was a well-known Marine Engineer on the Grimsby Docks.

The communion cloths used at the services of Holy Communion were made by Mrs. Newson whose husband was a trimmer on the trawler Wigmore and was killed at sea as a result of enemy action in November 1939, and Mrs. A. Mountain the Bethel Secretary until its closure in 1966.

Sited on the left of the communion area was of the type used in trawlers of seventy years or so ago.

The visitor can see still the two pointed candleholders lighting the compass, which is still accurate.

Originally as well as the glass front, beneath the brass cap on the top of the binnacle there was also a glass window so that the compass could be looked down upon.

When the binnacle was brought to this Chapel that glass was replaced with a copper beaten bowl and now we have the only ships “binnacle font” in the world. We are constantly called upon to baptise at this font the children of fishermen and seafarers.

Both the binnacle and the ships wheel on the lectern were positioned beneath the pulpit at the Bethel Mission. 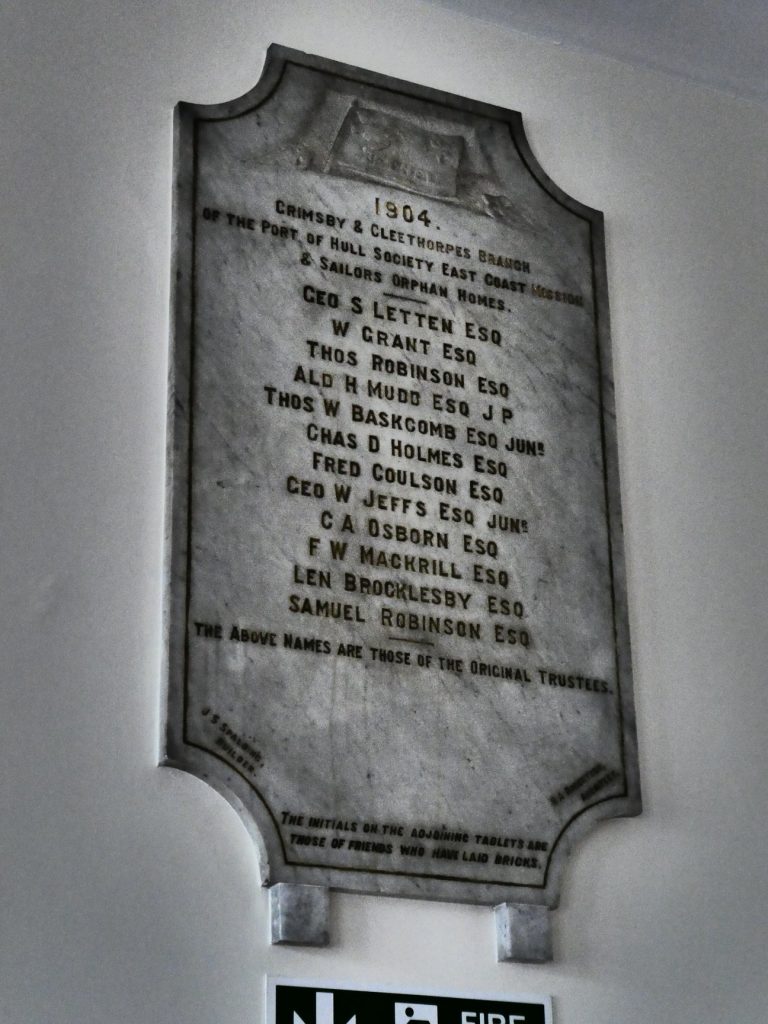 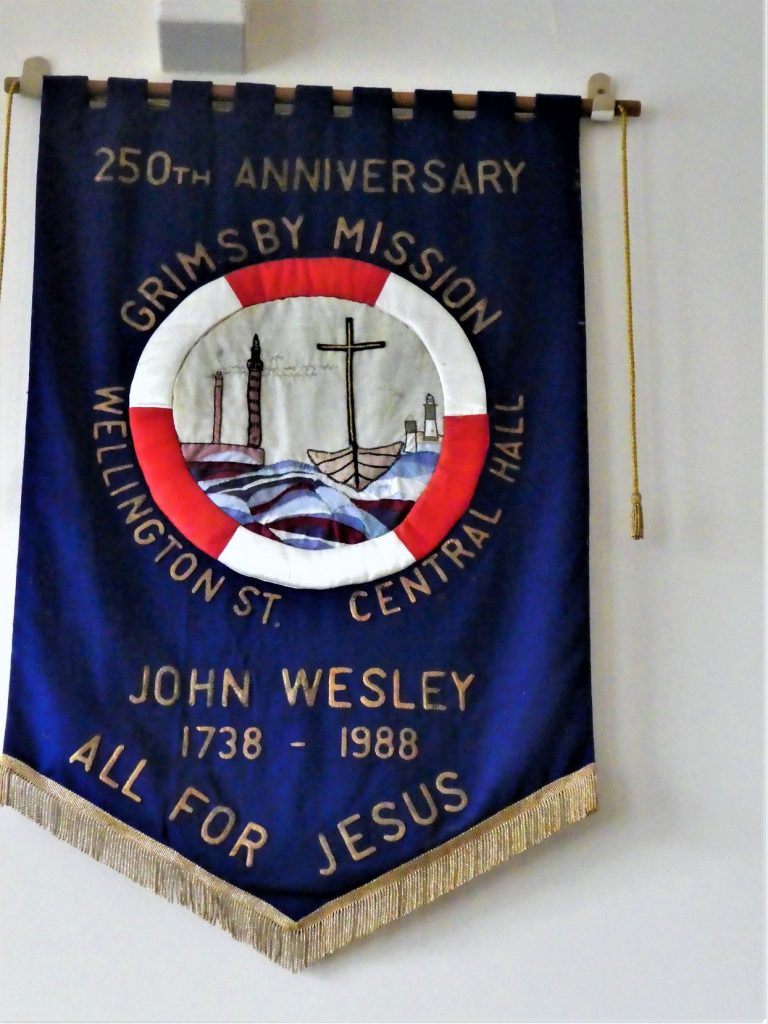 The first, to the side of the communion area, is a memorial to those members of the Epine lost off the coast of Iceland on the 13th March 1948.

On March the 31st an enquiry was told by the survivors how their colleagues had died.

“Two men fell exhausted from the rigging where they were seeking safety and were drowned as huge waves swept the vessel.

Two died on the whaleback.

The Skipper and cook while making their way from the tope of the wheelhouse to the rigging were swept overboard and never seen again.

The wireless operator was laying face downwards on the wheelhouse apparently dead.

One was last seen in a very bad condition entering the wheelhouse.

Another was washed overboard and reached shore but was washed out again to the rocks and was lost sight of.

Others were washed overboard but were already dead.

The second Engineer was washed off the top of the wheelhouse”.

This awful tragedy was made worse by the fact that the ship was near to shore and radio contact was kept with her throughout, but because of the heavy seas no one could reach the sinking trawler.

The cost of the memorial window was undertaken and place in the Bethel by relatives of the lost men.

The centre window of St. Peter the Patron Saint of Fishermen was designed by G.E.R. Smith and made by A.K. Nicholson of London at a cost of £150.

The Trawler Sheldon sank on January 31st 1953 with a loss of all hands. The names of the crew are listed in the panels of the window beneath a picture of the Sheldon steaming a full speed ahead.

A double tragedy occurred in that the skipper and mate were father and son.

The Sheldon sailed from Grimsby on January 26th and left Kirkwall the Scottish port on January 30th for the Faroe fishing grounds.

After that date, no radio contact could be established. For 12 days, the search went on but with no result. The silent ship was then presumed lost. 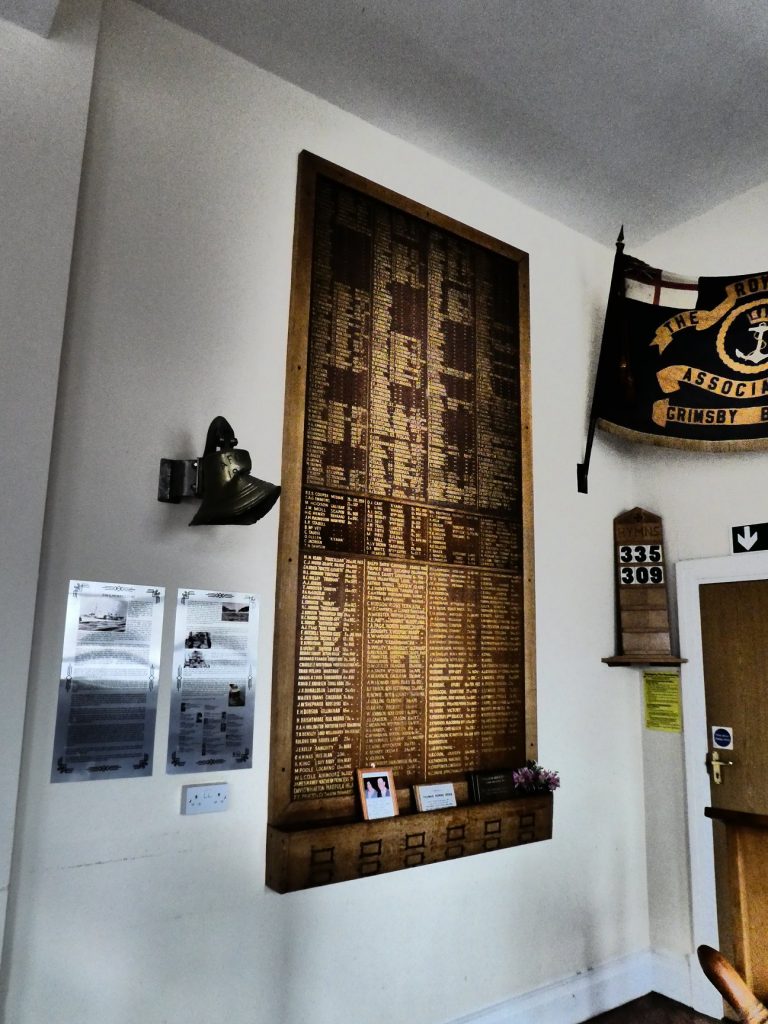 The owners of the Sheldon, Sir Thomas Robinson & Son installed the window at the Bethel and each bereaved family contributed “a minimum of two pounds to the cost of the memorial”.

It was unveiled by Mrs. G.L. Robinson on the anniversary of the loss of the vessel.

The third window showing the crew pulling in the trawl is dedicated to the men who were lost from the trawler Oswald.

Survivors were present in the service when this window was dedicated.

It was presented by the owners of the vessel the Grimsby merchants Amalgamated Trawling Co Ltd.

Both the Epine and Oswald were unveiled on Sunday March 13th 1949 by Mr. Kenneth Younger M.P. in the presence of the families of the lost men and civic leaders of Grimsby and Cleethorpes. 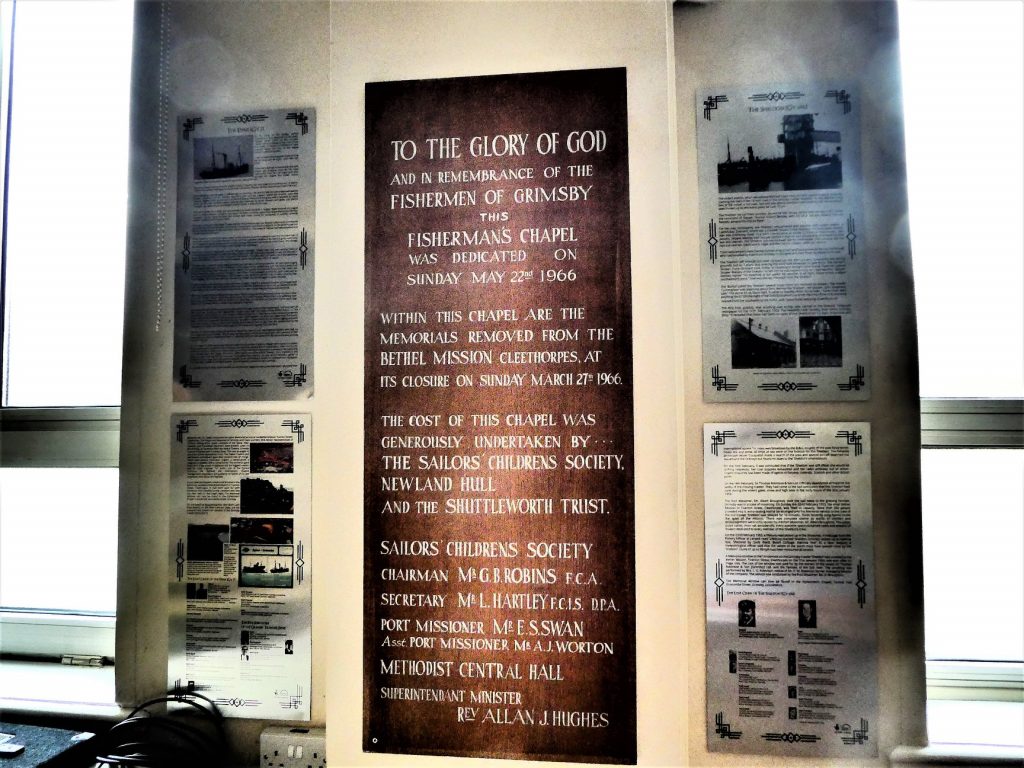 The chapel can be booked to be used for funerals, rememberance, or as part of any anniversaries regarding marine and fishing history.

If you are interested in booking please call 01472 349300, or alternatively email enquiries@centralhallgrimsby.org.